It should be pretty clear by now that I love food: making it, eating it, writing about it … mmm, food.  It should come as no surprise that I’m a fan of Competitive Eating.  Specifically, every Fourth of July, I love to tune in to ESPN and watch the Nathan’s Hot Dog Eating Contest.  At noon today, Ted and I were camped in front of my laptop to watch the live stream.

The very first event of the hour-long presentation is the women’s hot dog eating contest, but it was not always so.  In fact, the division of the competition into men’s and women’s contests only happened last year.  For the second year in a row, Sonya “Black Widow” Thomas won in the woman’s division, eating 45 dogs this year.  Prior to 2011, Sonya competed — and acquitted herself very well — with the elite men of the competitive eating field. 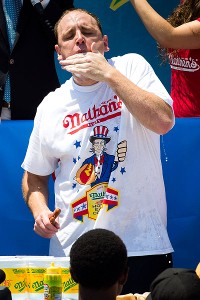 Right now the men’s Nathan’s champ is Joey “Jaws” Chestnut.  In fact, Joey just won his 6th straight title, tying him with Takeru Kobayashi for consecutive Nathan’s wins.  Kobayashi no longer competes in the Nathan’s contest after a conflict with Major League Eating, which took over the Nathan’s event in the mid ’90s.  Joey ate 68 dogs this year, tying a previous world record-setting performance of his; Takeru competed in the inaugural Crif Hot Dog Eating Contest, and they say he ate 68.5 dogs.  But that’s it’s own strange conflict.

Second and third place at Nathan’s this year, in the men’s division, went to Tim “Eater X” Janus and Patrick “Deep Dish” Bertoletti, with 52 and 51 dogs consumed respectively.  Fourth place went to up-and-comer Matt “Megatoad” Stonie, who is only 19 and giving elite eaters a run for their money; he ate 44 dogs — less than the Black Widow.

This whole women’s division thing really pisses me off.

I understand the need for divisions.  Joey Chestnut  is in a league of his own, but below him is a collection of similarly matched elite eaters, and it’s clear that Sonya Thomas is among them.  Why not have divisions based on skill-level qualifier rounds?  The Black Widow would easily qualify to compete with the likes of Jaws and Deep Dish.  And while it’s true that some sports are better left gender segregated for reasons of physiology, size and strength differences that might legitimately prevent female athletes from playing alongside male athletes in sports like football and hockey are completely moot in competitive eating.  Most of the elite competitors, although fit, are not particularly large.  Megatoad is all of 120 pounds; Takeru Kobayashi is 128.  Sonya Thomas is quite wee at about 100 pounds, but that clearly doesn’t have any impact on her ability to cram dozens of hot dogs into her mouth quickly.  While there is a physical component to competitive eating (both Chestnut and Kobayashi work out year-round), and some training techniques, it’s not a matter of size or strength: there’s absolutely nothing relating to the average physiological differences between men and women that requires the imposition of gendered competitive divisions.  This is more like declaring that a high school math team or quiz league needs to be divided according to gender.

Now, it may be the case that women make up a minority of elite competitive eaters — Black Widow’s closest rival, Juliet Lee, came in second in the women’s competition, having eaten “only” 33 dogs in 10 minutes.  Hell, it may be the case that women are in the minority when it comes to math teams and quiz leagues.  But that’s not a matter of ability, it’s a matter of acculturation.  Given all of the super fucked-up narratives about  food and control and morality that our culture foists on women, it’s no surprise that fewer women consider entering the field than men.  I assume that Major League Eating developed the Nathan’s women’s contest in the hopes of increasing women’s participation in competitive eating, but they’re taking precisely the wrong approach.  Women aren’t inspired when they see the best, elite woman competitor ghettoized, pushed into some less-than opening act; they’re inspired when they see an elite woman performing competitively alongside the best in the field in the world.  A friend of mine had the opportunity to see Sonya Thomas go up against Joey Chestnut in a wing eating contest that wasn’t gender divided, and she said watching the Black Widow take on the champ was amazing.  If Thomas — and any women like her — can play at the level of Chestnut and Bertoletti and Janus, then she should get the chance.  And seeing women competitors out-eat men will do a lot more to increase other women’s participation in Major League Eating — and hell, who knows, maybe even help to destabilize some of those super fucked-up narratives about women and food — than pushing them down the bill will.  Plus, you know who won that wing eating contest?  It wasn’t Joey Chestnut — Sonya Thomas kicked his ass.

Sonya “Black Widow” Thomas, a personal hero of mine.

Disclaimer: Some photos on this blog are taken by us, other photos may be procured from Google Images simply for the sake of adding color and a generalized illustration of blog subject matter. We will happily remove any picture at the request of originators who object to our using it.